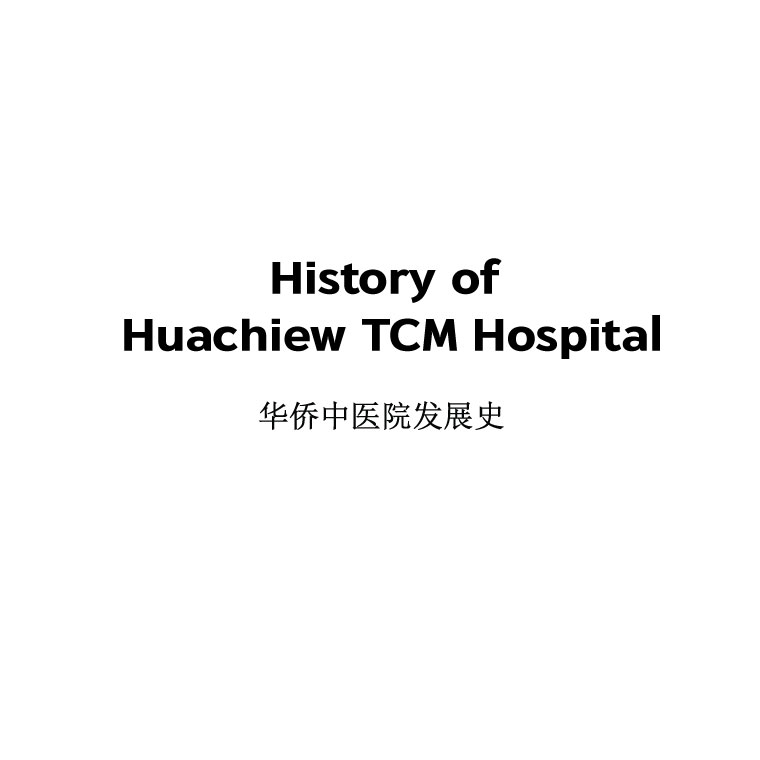 Poh Teck Tung Foundation established the current Huachiew TCM Hospital on July 5, 1995. Started acupuncture treatment in 1996. The hospital had 30 treatment beds, two massage rooms, and one Chinese pharmacy. On March 18, 1996, there were 200 kinds of commonly used traditional Chinese medicine Herbs in the pharmacy, the uses of herbs which gradually developed from 80-90 packs to 200 packs per day. On February 29, 1997, the Ministry of Health of China and Thailand signed a  “three-month training of acupuncture and moxibustion” training course for Thai Western doctors, Start from April 27 to July 24, 1998. Invited an experienced acupuncture expert "Professor Cheng Zi Cheng" as the lecturer. Since then, Huachiew TCM Hospital gave active cooperation and assistance to the Thai Ministry of Health in promoting the development of Chinese medicine in Thailand. important role in the health of Thai people. The space used by Huachiew TCM

Hospital was limited and could not meet the growing number of patients. On the

Foundation and the 25th anniversary of the establishment of diplomatic relations

between China and Thailand, the Poh Teck Tung Foundation has built a new 8

development of China-Thailand friendly relations and has brought enormous

benefits to the Thai people.

exchange between China and Thailand.

and   Minister of Health of Thailand

treatment process from registration to medicine and payment. The eight Under the leadership of director Su Sin, Huachiew TCM Hospital has a high

sense of social responsibility, serving the patients regardless of social class,

nationality, and religion. At the same time, he has continued to promote the

development of hospitals and become advertised for comprehensive Chinese

In 2006, Mr.Yi Jin Zhong took over as the second director of Huachiew TCM

Hospital. From August 4, 2006, an accountant began to take charge of the records

of financial expenses, medicines procurement and acceptance, and employee

manage the financial work of the hospital. At the same time, the development of

Chinese pharmacies has continued, resulting in a significant increase in the use

of Chinese herbal medicines. In order to adapt the existing management

On January 15, 2009, Director Aram Eamsureya took over as the third director

of Huachiew TCM Hospital. During this period, the hospital was in a period of

steady development and the number of patients increased steadily. From 2009 to

2016, it is a key moment for the development of Huachiew TCM Hospital. Director

Aram Eamsureya has a long-term development vision, determined the correct

development direction of the hospital and formulated an effective management

system, and promoted the hospital to form a more comprehensive and effective

management system. Lead the hospital to develop in many aspects.

Ratchasima on May 20, 2014. This is the historic breakthrough of Huachiew TCM

Hospital. The first establishment of the branch, the Nakhon Ratchasima branch

will become advertised of other branches in the future.

with the theme of“Traditional Chinese Medicine for 20 Years, Creating a New

Contribution to Efficacy”. Thailand has entered "ASEAN Community" in 2015,

and structure. Policies have been formulated to comprehensively improve the

management level of the hospital. In order to better cope with various

developmental variables that occur in the future, it is divided into two phases: the

Nowadays, the price of medicines in the Chinese herbal medicine market in

Thailand is rising steadily. At the same time, there is still the unstable quality of

from Chinese pharmacies, thereby controlling the cost of the medicines and

ensuring the efficacy of the medicines, as well as the future of the hospital. The

Tung Foundation applied for a land area of about 7,500 square meters in

Nonthaburi Province for the construction of a new medicine storehouse. The

construction project is divided into three phases, and now the first and second

phases of the project have been completed.

-          The first phase: the construction of a Chinese medicine storehouse.

-          The second phase: the construction of a Chinese medicine processing room.

On January 26, 2018, there was an formal opening ceremony "Huachiew

Comprehensive Chinese Herbal Medicine Learning Center" with the objective of

to the study and progress of Chinese medicine in Thailand, and to celebrate the

23rd anniversary of the opening of Chinese medicine services in Thailand. In the past eight years, Chinese medicine practitioners in Thailand society have

jointly promoted and enhanced the status of Chinese medicine in Thailand law.

On March 1, 2016, the Thai name of Huachiew TCM Hospital was renamed as

development and change of Huachiew TCM Hospital. On May 2016, Huachiew

Exchange and Cooperation Conference, which made the reputation of Huachiew

and other leaders as well as media. In addition, the new generation doctors who

help develop and advance the hospital. Huachiew TCM Hospital. Under Director Aram Eamsureya and the management

team continue to improve the management system, treatment service and

academic. Until on December 15, 2018, Huachiew TCM Hospital was supported by

Chinese Medicine of the People's Republic of China), as a foreign cooperation

project of the State Administration of Traditional Chinese Medicine, Has been

chosen as the "China-Thailand Traditional Chinese Medicine Center", and was

honored by Mr. Li ChunLin (Counselor and Consul General of the Embassy of the

People's Republic of China), and Dr. Zhen Xiao (the President of Shanghai 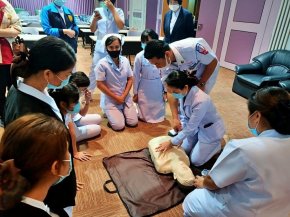